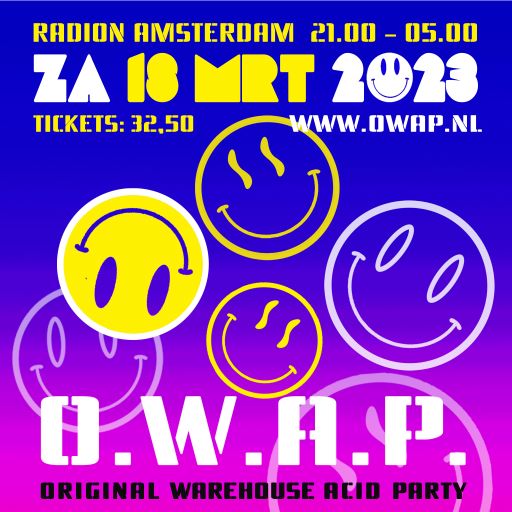 A NIGHT YOU WON’T REMEMBER, BUT YOU’LL NEVER FORGET!

The Original Warehouse Acid Party is the bigger, yet younger brother of the “Oud Hollandsch Acid Feest” (OHAF). No average house classics party, but the Mother of all parties where all the movements in dance music of the last 25 years have found their roots, organized by the originals of old glorious times.

THIS IS HOW IT ALL STARTED… HERE WE GO AGAIN!!!

The O.W.A.P. began in 2002 when there was a great need for a large Warehouse party. This provided the possibility to track down the true living legends of yesteryear for the best revival party in the Netherlands. With classic House, Techno, US Garage, Acid, Hip House and Disco. A trip down memory lane! According to these legendary dinosaur-DJ’s, their sets at O.W.A.P. were one of the best and most fun they’ve ever played. Among them are Kenny Dope (MAW), Todd Terry, Derrick May, Kevin Saunderson, Lil Louis, Cajmere (aka Green Velvet), DJ Rush, Mike Dunn, Terry Hunter, Mr. C Hardfloor and Hacienda greats Danny Rampling, Mike Pickering and Graeme Park to name a few…and more Classic and Acid House heroes are still to come! There is also a live element; Phuture 303, Byron Stingily and Tyree Cooper from Chicago and Barbara Tucker and Mark Verbos from New York and MC Kinky of Ezee Posse from London. They all performed with great success at O.W.A.P. From the Netherlands Dimitri, Remy, Joost van Bellen, Eric de Man, Groove Master Johnson, KC the Funkaholic, Grooveyard, Roog and RiskSoundSystem haven taken their place behind the decks bringing us back to acid house heaven. All hosted by ‘The Dutch Diva Of Dance’ Miss Bunty and The Original Confettiman. But more important than all those greats is the amazing crowd, many music lovers and down to the bone diehard party people, delirious with their hands in the air, striking and colorfully dressed, resurrecting the glory days of house. Smileys dominate, but also fluorescent prints, balloons, mirror balls, psychedelic patterns, sirens, stadium horns in hand and whistles around the neck. The smoke machines are on tilt, the strobes flashing as never before, because this is the O.W.A.P.! Here you can party like it was 1989, as if the sun will never come up and the party always will continue… like there is no tomorrow!